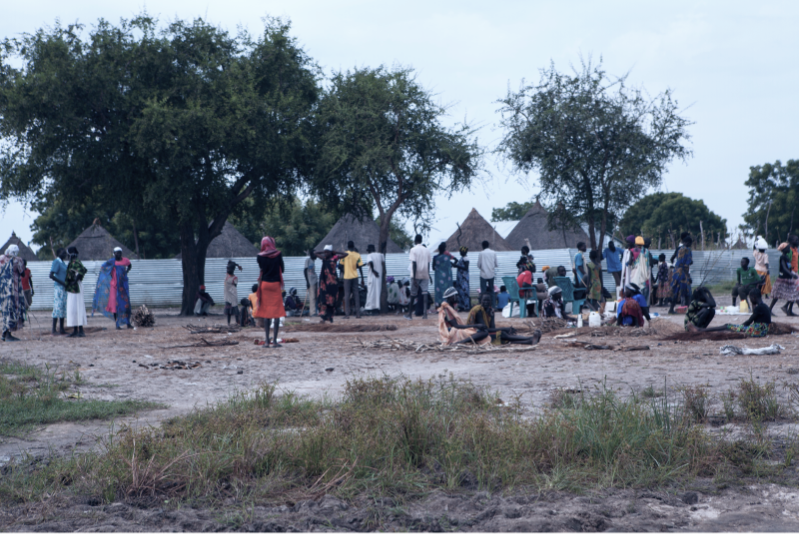 21 November 2022
In few other countries is safely delivering humanitarian assistance as challenging as in South Sudan. INSO’s crisis management support, as well as real-time reporting and analysis, is helping NGOs to keep safe and manage risks.

As the youngest country in the world, South Sudan’s short history has been marked by many years of conflict. The civil war from 2013 to 2018, and the ongoing fighting that continues today, has displaced millions of people across the country. Meanwhile, food insecurity and increasing hazard events are exacerbating existing challenges. Today approximately 8.9 million people – 72% of the population – require humanitarian assistance.

The country is also one of the most challenging environments for humanitarians. According to INSO data, there have been 11 fatalities among NGO staff in South Sudan to date this year. The rate of one aid worker killed per month is higher than any of the 15 countries INSO monitors, accounting for around 29% of the total number of aid workers killed in 2022 so far.

But with so many people in such significant need, it is crucial that life-saving aid continues to reach communities in South Sudan. Being able to rely on crisis management support from INSO is a crucial part of operating in such a volatile context.

“We are thankful that they are alive”

One example of INSO’s crisis management support in South Sudan occurred in June. Late on a Friday afternoon INSO’s Country Director for South Sudan, Kerri Ann Kelly, received an email from the Executive Director of a National NGO, George*. The email explained that two of George’s staff had been abducted and requested INSO’s support. George had exhausted his own channels and was deeply concerned for the welfare of his staff.

“When I first heard that my staff were [abducted], I felt bad. I was worried that they were tortured. It was hard even to sleep,” George shares. “I knew this incident increased the security threat not only to the staff that were abducted but to my whole organisation. So we tried to connect with different networks we wrote an email to INSO.”

On reading George’s message, Kerri immediately picked up the phone.

“I pulled up his phone number and called him,” explains Kerri. “I said, firstly, “I’m really sorry.” We chatted for a few minutes before I suggested that he come to our office to discuss the situation further in person.”

Once together at INSO’s offices, the two discussed the situation further, including the next steps that would need to be taken, where the staff members may have been taken and by whom. INSO provided the contacts that George should reach out to for support and to attempt to safely resolve the situation. With the information from INSO, George was able to liaise directly with an international organisation that assists with cases of abduction.

INSO was also able to verify, through local contacts, that George’s staff were alive and, together with the national NGO, to confirm where they were being held and by which group. Throughout the entire process, George says INSO was involved and supportive.

INSO advises and supports NGOs from its country office in Juba along with several field offices.

“INSO was frequently checking in with me to know what was happening. They were staying in close contact. Even when it was confirmed that the staff would be released, even on that day, INSO was helping me to get prepared for the staff to be released. We are thankful that they are alive.”

He explains the difference that INSO’s crisis management support makes:

“The difference that INSO makes is that they are quick in responding, they have huge capacity in handling such cases and they have wider networks. They did not delay, immediately they were thinking of the life of the humanitarian who was abducted as their own life.”

Abyei Administrative Area is a disputed area where there are significant humanitarian needs and a high level of intercommunal violence. In February 2022, clashes between two subclans erupted with little warning. Peter*, the security manager of an International NGO, first heard murmurings of unrest late in the evening from his colleagues working in the area. He immediately contacted INSO.

He and the INSO Safety Advisor reached out to other NGOs working in the area and together they assessed the situation. INSO sent an alert to all NGO partners, warning them of the heightened tensions and urging them to remain indoors.

Though Peter and the Safety Advisor were not in Abyei Administrative Area, which is very difficult to access, through information sharing they were able to get a clearer picture of the situation which had escalated rapidly through the night. Within hours of the first indications of unrest, intense conflict had erupted. Two of Peter’s staff were caught in the crossfire and seriously injured, while an aid worker from another NGO was killed.

Working together in the day that followed, the group were able to move Peter’s staff in the area, including those that had been injured, to a safer location. 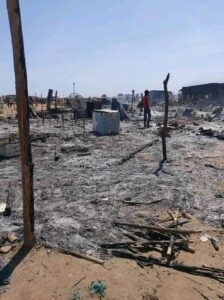 The aftermath of fighting in Abyei Administrative Area, which lies on the border of Sudan and South Sudan.

“All the people working in that group allowed us to get a sense of what was going on and make informed decisions,” says Peter.

Once Peter’s staff were safe, the next challenge was returning to the area. Because of the seriousness of the previous incident, all NGOs in the area were hesitant to return. Sporadic fighting was also being reported by INSO.

But knowing that there were still needs in the area, it was decided to send a local security manager to assess the area.

The same day this staff member arrived, there was a second conflict escalation.

“I was talking to them over the phone,” describes Peter, “and I could hear the bullets hitting the wall behind them. Throughout that whole period, the only organisation that was getting the information out was INSO. INSO was our sense check.”

With assistance and advice from INSO, Peter was able to guide his staff member to get out of the area to a safe location and avoid a possibly fatal scenario.

Mary*, the Country Director of an International NGO operating across South Sudan, describes another emergency where INSO stepped in to help:

“We have a very large team that helps to run the hospital we manage in the east of South Sudan. The hospital serves everyone, refugees as well as the host community. There are significant tensions between these groups and, a few months ago, the Area Manager covering this hospital was reported to the authorities on false pretenses. The staff member was forced to remain under house arrest for around three weeks.”

While Mary and her team attempted to resolve the situation from Juba, things got worse. The staff member was illegally detained and Mary’s organisation was informed that the staff member would have to stay at least overnight. She knew the situation was very serious, so she got in touch with INSO along with several other agencies.

“Together with INSO, we discussed the situation and INSO advised me on what we should and could do. After understanding the situation, INSO recommended I talk to quite a few people that could intervene in the situation.”

With advice and support from INSO and others, Mary’s organisation was able to negotiate for the release of her staff member and have them evacuated from the country as their safety was at risk. She says that during the whole process, INSO was checking in to see how she and her team were doing but also to provide emotional support.

“INSO’s Country Director also comforted me as well, which I think is really important,” says Mary.

Kerri explains that this is a key part of what she expects from her team: “We always really try with everybody, and I’m firm with the team on this, to start with empathy. Empathy always comes first.” 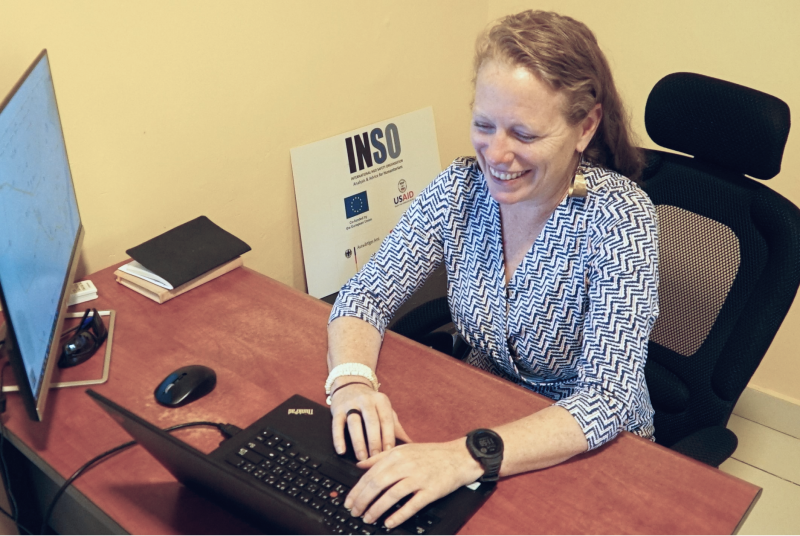 Current INSO Country Director in South Sudan, Kerri, says empathy is an important part of what she asks of her team.

INSO has been active in South Sudan since 2018, and in that time many NGOs have come to rely on its advice and analysis. Luke*, a security manager of an international organisation working on peace and development, says that having a trustworthy and reliable resource like INSO is invaluable.

“Having someone I can fully trust, who’s devoted exclusively to security, that I can get all sorts of advice – contextual or technical or whatever form – is really valuable. The team has been consistently a solid partner in terms of the quality of its product,” shares Luke.

INSO is hiring in South Sudan – work with us

Founded in 2018, INSO in South Sudan monitors all 10 states and three administrative areas. The platform currently supports 133 national and 118 international NGOs. We are grateful to the European Commission, USAID’s Bureau of Humanitarian Assistance (BHA), the German Ministry of Foreign Affairs and the Swiss Agency for Development and Cooperation for their support of INSO in South Sudan.

*For confidentiality reasons, names have been changed.