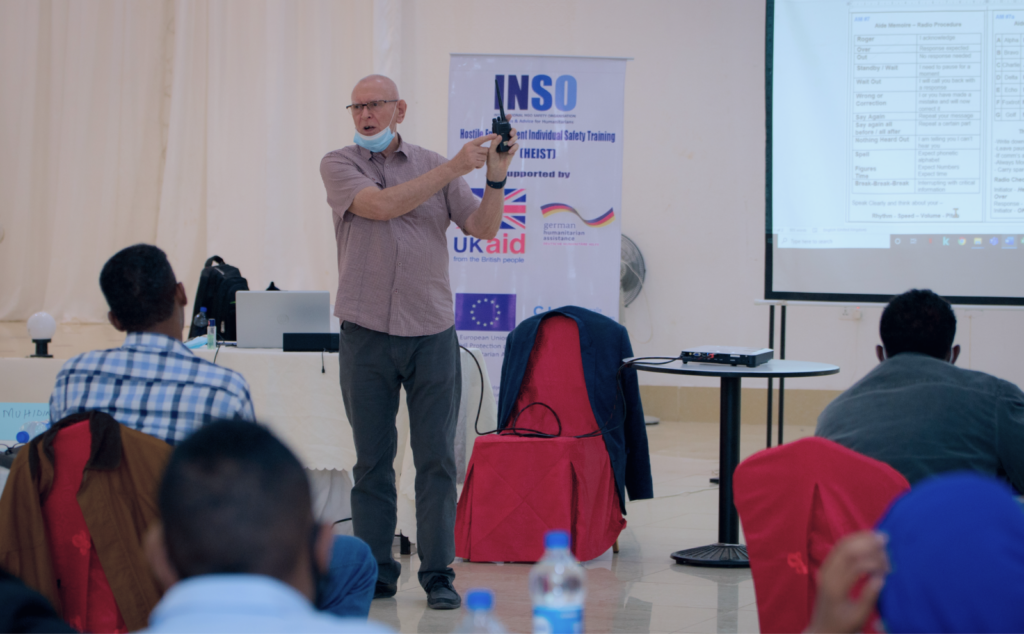 31 May 2022
Humanitarians in Somalia and Somaliland face many challenges in delivering much-needed aid to communities. By attending HEIST and other trainings facilitated by INSO, they are equipped with the knowledge to keep themselves safe while helping others.

An old four-wheel-drive sits under the searing sun, abandoned to the side of a hole-ridden dirt road. Around the car, people with serious injuries cry out for help. The grumble of an engine increases in volume as, further down the road, an armoured vehicle approaches. People waving weapons in the air can be seen.

This is not a real scene, but it’s as close as possible – which is exactly the point. It’s part of a practical mission scenario that participants go through as part of INSO’s training for aid workers. INSO’s Hostile Environment Individual Security Training (HEIST) aims to prepare humanitarians for the very real risks that may face in their work. And in Somalia and Somaliland, these risks are significant.

A challenging context for aid workers

For three decades, this region has experienced a complex humanitarian emergency characterised by political instability, frequent conflict and criminality, as well as severe environmental and economic shocks. Aid workers in particular face daily risks of kidnapping and abduction, as well as being inadvertently involved in acts of violence such as shootings and improvised explosive devices (IEDs). But, as INSO Training Manager Stuart Donaldson explains, making participants aware of these risks is the first and most important job that his training team has to tackle.

“Often, the first and biggest challenge is to remind NGO staff that they are operating in a hostile environment,” says Stuart. “Staff who are nationals often wonder what I am going to teach them that they don’t already know, as they are so familiar with the country where they have lived all their life. But it’s about making them and all trainees aware that there are risks, helping them to understand the risks, their vulnerabilities, and the mitigation measures they can take.” 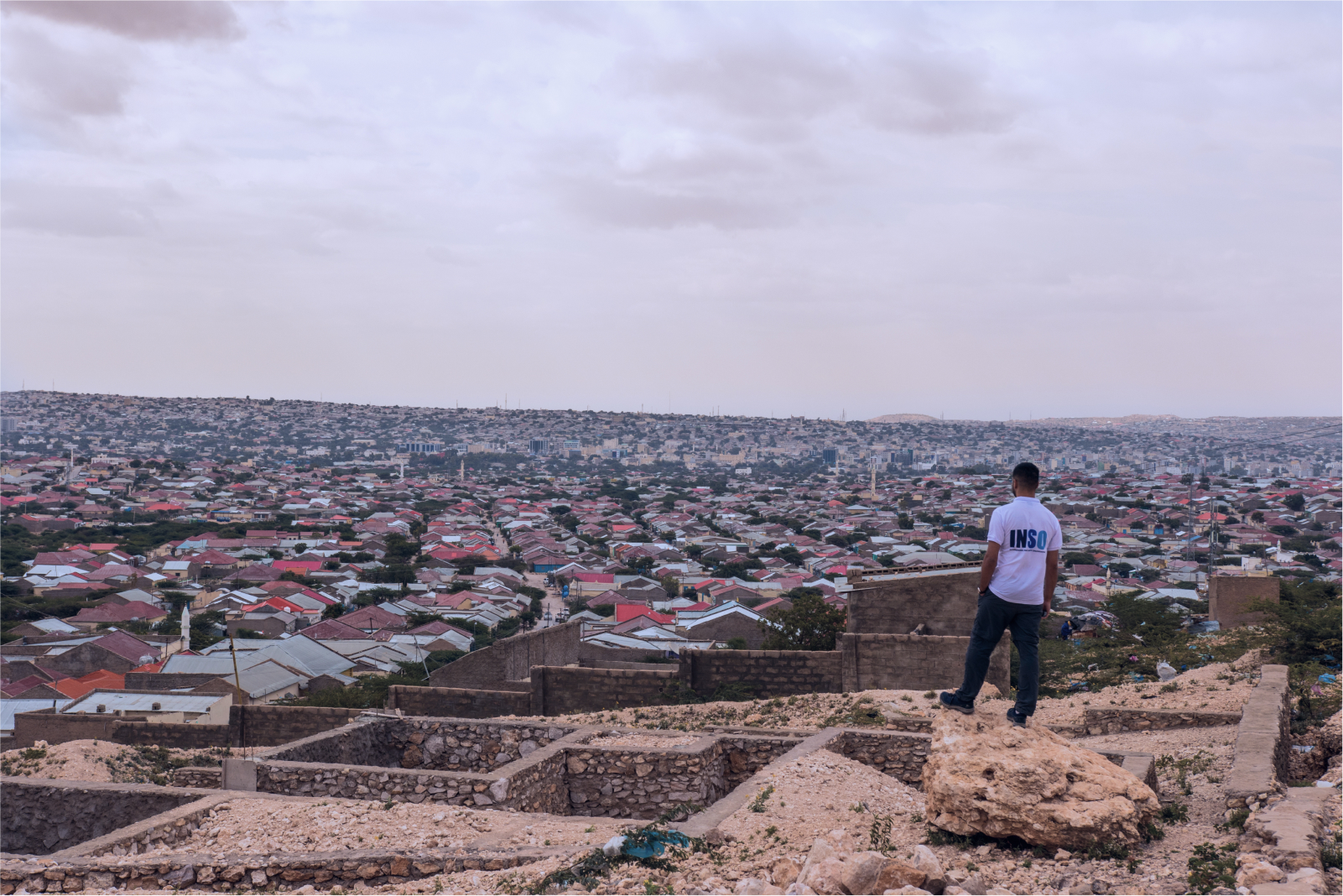 Hibo Awil, a past trainee and Administrative Assistant for ONE EARTH FUTURE, says the training opened her eyes: “The training was fantastic, it helped me understand how vital security is while working with NGOs.”

Because it’s not only during work when Stuart’s trainees can face security threats. Attacks on public places are common, particularly in populated areas, and anyone can be caught in the crossfire. “Every day is a challenge – even when you’re not at work. Where you’re living, where you’re working, when you’re moving around – people need to learn how to mitigate the risk of coming across a dangerous situation.”

“Every day is a challenge – even when you’re not at work.”

Understanding these risks and how to mitigate them in order to deliver aid is crucial, because there are also immense humanitarian needs in Somalia and Somaliland.

Millions of people in need

Agriculture – predominantly livestock-raising – accounts for three-fifths of Somalia’s economy. Given this, recent extreme weather events such as flood and drought have had a devastating impact on the population. The country also has extremely high rates of poverty, with an estimated 69% of the population living under the international poverty line of USD $1.90 a day.

As at May 2022, around 6 million people in Somalia were affected by drought and famine, and in need of humanitarian assistance. But delivering this assistance is difficult in such a complex environment. Participating in training that addresses the unique challenges of aid work in Somalia is crucial to ensure aid workers are able to safely access people most in need.

‘For training to be effective, it has to be realistic.’ It’s an expression that Stuart recalls from his time in the police force, and it’s a sentiment that he and all INSO training teams apply. For participants like Omar Mohammed, Country Director for Mines Advisory Group in Hargeisa, the localised aspect of these trainings is particularly valuable.

“[INSO’s] HEIST is rather unique because it is specific to our context in Somalia and Somaliland where we are working,” says Omar. “The training takes place in the same location we experience every day. The trainer tries as much as possible to link every session, or examples within the session, to the context we are working, which is very helpful.”

Educational elements such as preparing for road movements, mapping actors and negotiating access, as well as understanding International Humanitarian Law and humanitarian principles, are tailored to the unique context of Somalia. Remaining neutral and impartial while also understanding cultural norms and practices is important for an NGO operating in the region, as getting access to deliver humanitarian aid requires negotiating with many different and often opposing groups.

“The training takes place in the same location we experience every day.”

Another way that INSO’s training for aid workers is tailored to the context is through sharing personal examples. Participants are encouraged to share their own experiences and to learn from one another.

“By sharing experiences and discussions, trainees can learn more,” says Omar, who has both participated in HEIST and has had his own staff participate. “From these discussions and lessons learnt, we are alerted to things we just take for granted but that could pose a threat to our staff or assets.”

One very real story often shared in these trainings is that of a past trainee from Kenya. In 2012, along with two colleagues, she was kidnapped in South Central Somalia by an armed group. The aid workers spent 23 months in the bush with their captors. Now, this past participant is a host presenter during some Senior Managers Training courses. She credits INSO training with giving her tools that helped her to survive the kidnapping. 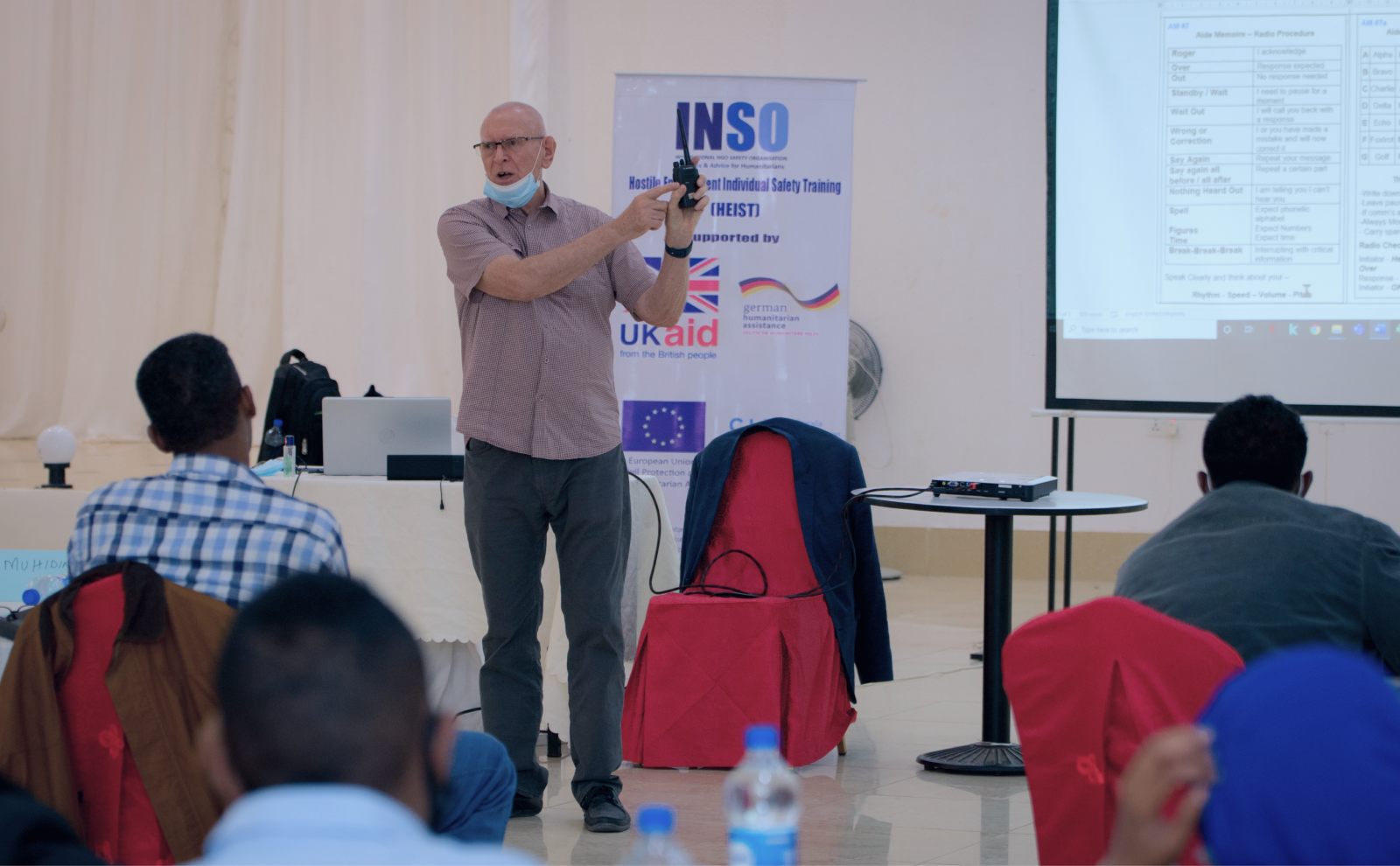 INSO trainer demonstrating use of a VHF radio during a training in Somalia.

Of course, it’s after participants leave that the true value of this training is proven – when participants apply what they have learnt to their day-to-day operations.

Omar shares: “After returning from this training I have improved the security of our compound, as I found out that it was not adequate enough. I have also started to analyze the trends of security situations as they happen, so that we can consider what could happen next or plan properly when staff are required to travel.”

Other past trainees have applied their learning in different ways. Saeed Hashi, Security Manager for Oxfam, shares about one particular incident where he says his Crisis Management training kicked into gear:

“In late 2021, a colleague was detained. We lost contact with them for about 23 hours. This was one of the most challenging tasks I have faced with this organisation. Since I have taken INSO’s Crisis Management course, I have learnt a lot about incident management that apply to cases like this one, such as immediate actions including roles and responsibilities, information gathering, contacts, communications and managing media, as well as security for remaining staff.”

An INSO trainer talks with two participants in Somalia

Courses throughout Somalia and Somaliland

Beside HEIST which is run in Hargeisa, INSO also offers Humanitarian Negotiation, Personal Safety Training (PST), Safety & Security Management, Crisis Management and a guided learning Small Private Online Course. Personal Safety Training is delivered across the country, in Mogadishu, Baidoa, Belet Weyne, (South Central Somalia) Garowe (Puntland) and Burao (Central Somaliland). From May 2021 to May 2022, 406 aid workers have been equipped through free-of-charge INSO training with the knowledge they need to keep themselves safe. And that, above all else, is the goal.

“That’s the purpose of any INSO training: to give the knowledge and understanding, the skills and the awareness to the trainees to operate safely wherever they are, everywhere.”